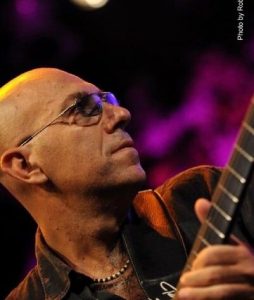 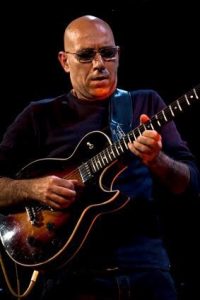 Fabio Zeppetella is one of the most talented guitar players and italian composers come out from today’s international but also european jazz scene.
Great technique and high musical sensibility, he has got a personal own language come out by a research through his own style of playing, which he developed during the years.
All this, passing through the jazz tradition made out by incredibile musicians and composers such as Charlie Christian and Wes Montgomery, evocating Bebop and the younger sixties Hard-Bop.
His phrasing leads to dominant aspects of a never expected language, sometimes virtuoso, some other times sweet , but essentially pure, paying particular attention to the meaning of every single note he plays , besides the moving frequences produced by them.
His dominant characteristics are the freshness and the strenght of his original way of interpretating music, and a deep research of lyrism where poetry and music melt up.
His dymanism brought him to take place on several projects, from jazz to funk and R’n B.
During his career he has played with artists such as Kenny Wheeler (cd Moving lines 1995 DDQ)
Lee Konitz, Tom Harrell (cd The auditorium session 2008 PdM), Enrico Rava (cd Spirit, energy, presence Braveartrecords 2005); Paolo Fresu (cd Greetings from Pozzuoli Challenge 1998), Aldo Romano and Danilo Rea (cd Jobim variations Universal 2009), Emmanuel Bex and Roberto Gatto (cd A tribute to Wes Montgomery 1998 Philology and cd No clue Braveartrecords 2010), Steve Grossman, Javier Girotto, Nicola Stilo, Stefano Bollani, Rosario Giuliani, Fabrizio Bosso, Gegè Telesforo (cd Love and other contraddictions Groovemaster edition 2007), Stefano Di Battista, Maurizio Giammarco, Gianluca Petrella, Fabrizio Sferra, Aaron Goldberg; Greg Hutchinson, Ramberto Ciammarughi, Heyn Van De Geyn, Peter Bernstein and many others.